In the previous post we saw how we could project polyhedra into the plane, and use some simple properties about planar graphs to classify all the possible Platonic solids. In this post we’ll finally get to the buckyball, by considering a less restrictive class of polyhedra: the fullerenes.

The Platonic solids were extremely regular: every face had to be the same, with all angles and side lengths the same, and the same number of faces meeting at each vertex. In a Fullerene we allow the faces to be either pentagons or hexagons, but we require exactly three faces to meet at each vertex. We can still take a one-point projection and get a planar graph: it’ll be 3-regular from the vertex condition, and every face has degree five or six.

This turns out to force a seemingly stronger condition on our graphs:

A fullerene has exactly twelve faces of degree five.

So in a certain degenerate sense we’ve already seen a fullerene – if we have 12 pentagons and no hexagons, with three pentagons meeting at every point, then we have one of our Platonic solids – specifically, the dodecahedron. However, the motivation for studying fullerenes comes from molecular chemistry, where they arise as different allotropes of carbon. But the laws of physics get in the way of having adjacent pentagonal faces when building with carbon – the bonds are not stable. To be a viable fullerene in the chemical sense, our fullerene graph has to have isolated pentagons. That means that none of the five vertices of each of the twelve pentagons can be shared, so a fullerene has to have at least sixty vertices. But, remarkably, we can exhibit a 60 vertex planar graph with twelve pentagonal faces, all other faces hexagonal, three faces meeting at every vertex, and no two pentagons touching:

This, as you may have guessed, is our long-awaited Buckyball! Or, more properly, Buckminsterfullerine. This is the simplest possible isolated pentagon fullerene, but it is still much more complicated than the more familiar allotropes of carbon: graphite and diamond. The theoretical existence of the C60 allotrope had been advanced several times in the 60s and 70s, but was not generally accepted as a realistic possibility by the scientific community. That had to change in the 1980s, when it was first synthesised by Kroto, Curl and Smalley. They named it Buckminsterfullerene due to its resemblence to geodesic dome constructions by the architect Richard Buckminster Fuller: 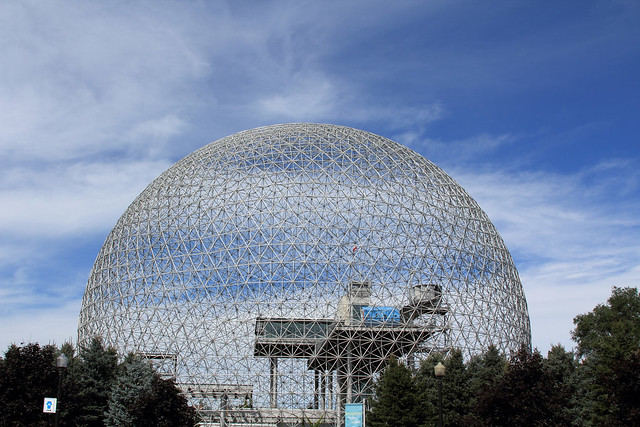 From my travels: The Montreal Biosphere, the largest of Buckminster Fuller’s Geodesic Dome constructions. These are the namesake for Buckyballs, but are not actually fullerenes!

They also produced C70, showing that C60 was just one instance of a general class, the fullerenes: they received the 1996 Nobel prize in Chemistry for opening up this field of study. It has subsequently been shown that C60 is naturally occuring – it can be found in soot, created by lightning, and has even been identified in clouds of cosmic dust!