In the previous post, we saw that if a is a vertex of a Conway 99-graph G, then up to labelling the only possibility for the neighbourhood of v is the following: 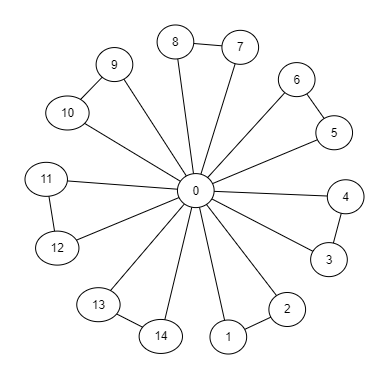 In this post, we describe the results of a search for all possible subgraphs consisting of two adjacent vertices a,b and all of their neighbours in G.

Moreover, we introduce these vertices sequentially using the ‘fanblade’ structures centred at vertices 0 and 1:

Our task then essentially reduces to determining j for each i=16…26, whilst satisfying all our other conditions.

I have produced an assortment of python functions for working efficiently with strongly regular graphs, defaulting to the Conway 99-graph but (hopefully) valid for generic parameters; a public github repository is here. Included is a notebook working through this search; you can view it here if you just want the results without having to run the code yourself.

The rest of this section sketches out some of the challenges in working with srgs, particularly with regard to growing valid supergraphs from a given starting set.

As discussed in the previous post, we could in principle work our way from any subgraph G’ to G by considering all possible ways to add a vertex v’ to G’, and discarding those which can be identified as breaching a known subgraph property.

Thus far we’ve described everything purely in graph-theoretic terms. However, graphs can be awkward to work with as a data structure; under the hood, we will instead use two dimensional arrays for the corresponding adjacency matrix of a graph.

Usually, this is a matrix of 0s and 1s where the (i,j)th entry is 1 if and only if vertices i and j are adjacent. (Thus when we say the adjacency matrix, we actually mean an adjacency matrix – for an unlabelled graph each choice of vertex numbering will give different – but equivalent – representatives. For this search, however, we have already prescribed a particular labelling.)

However, in the code we’ll extend this to a template form which also allows (i,j) to take the value 2, to indicate an unspecified edge and thus a collection of graphs sharing some common edges and non-edges.

A round of growing

Fortunately, many of them will turn out to be equivalent, as we can take alternative routes to the same (abstract) graph. For example, we argued at the start that attaching vertex 15 to any of j = 3 through 14 was equivalent, so we might as well specify that j it be vertex 3. If we hadn’t done that, we would have obtained 12 valid solutions, one for each choice of j. Having done so, our specification of vertex 16 as the mutual neighbour of vertices 1 and 15 yields 11 solutions, but these only fall into two equivalence classes.

Thus we need to be able to reduce the solution list modulo isomorphism. For the mathematical part I rely upon Nauty, via the orthogonal array package; this documentation (implicitly) describes how to compare a single pair of matrices for equivalence by comparing if they have the same normal form.

However, this soon turns out to be prohibitively expensive to compute (even with early abort when a match is found), due to the need to put both the representative and the candidate in normal form each time. It is better, therefore, to keep the normal forms along with the representatives, then normalise each candidate once and test for equality to any of the representative normal forms. Since we’re now testing equality, we can go faster by handling this as a dictionary lookup rather than sequentially working through a list… except numpy arrays are mutable and thus can’t be used as keys. Thus I took the questionable choice of converting the normalised array to a full tuple of its entries to get something hashable, likely losing all sorts of representational efficiency: a classic time/memory trade-off that has made the reduction pass negligble compared to the proceeding growing step, but will eventually cause problems!

As with equivalence testing, it’s pretty easy to write functions that compute the numbers of common neighbours, but when comparing in bulk there is simply too much repeated or otherwise unnecessary work: when you add a vertex to a valid graph, there are only a few places where it can become invalid; and as soon as you find one invalid vertex pair there’s no need to continue testing others. Thus in the code you can find _with_subgraph_mutuals versions of various functions, which again trade off some memory to avoid recomputing known (or more easily derived) values.

With these various improvements, it takes only a few seconds to recover the possible 27-vertex graphs on 0,1 and their neighbours.

There turn out to be only eleven possibilities. The first of these proceeds in the obvious way, matching 16 to 4, 17 to 5 and so on for this pleasing (after some artistic re-arrangement in yEd!) graph: 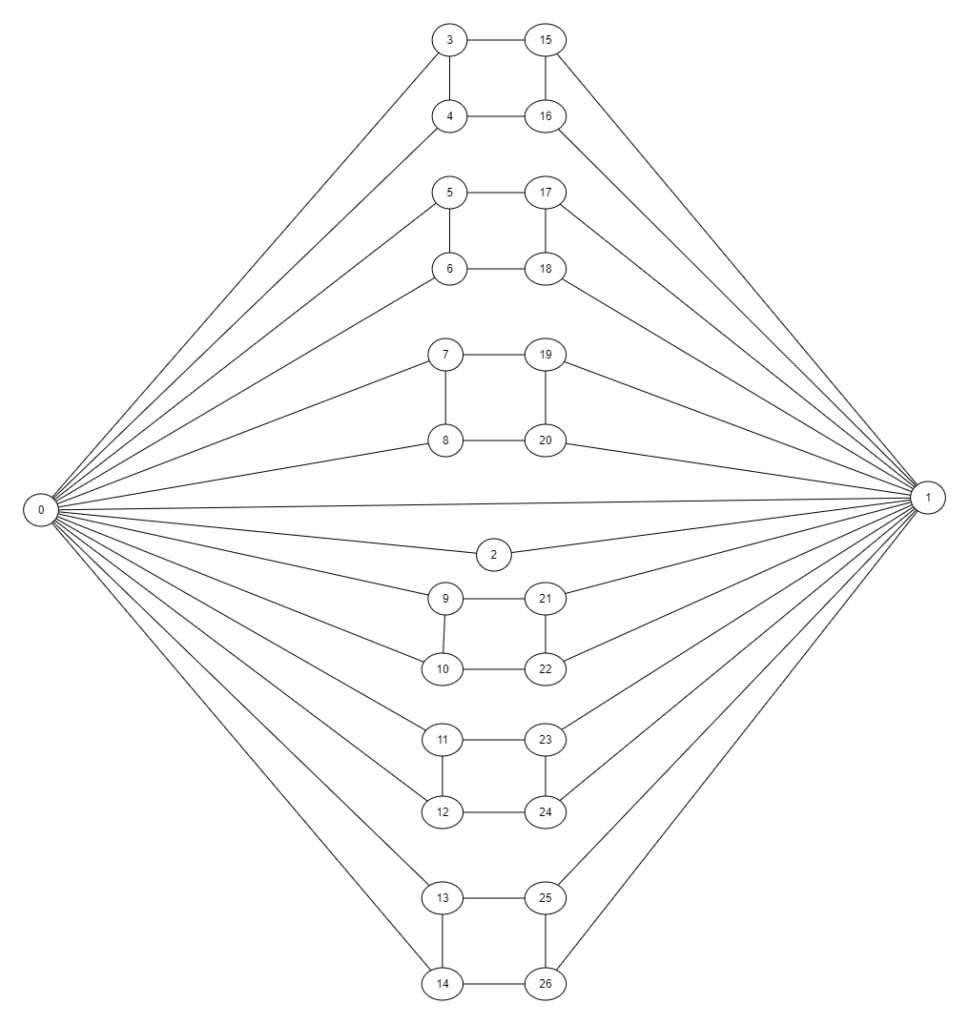 The others are more complicated; the notebook describes the differences to this baseline. We can also see that there are no edges in common to all 11; that is, our initial choices did not propagate further and we require further assumptions to force a particular subset of the solutions.

Unfortunately, things get much worse from here. The github repo contains two ‘full search’ notebooks. The first proceeds as with our route, trying to introduce neighbours of vertex 2; this will climb to nearly 3 million 33-vertex graphs which it is unable to reduce. The second hands control over edge requirements to a ‘greedy’ version of the growing algorithm, which identifies the vertex closest to being saturated and attempts to add neighbours of that (in the hopes of reaching impossible features sooner). Tiebreaking on label, this therefore favours vertex 3 over vertex 2 but grinds to a halt sooner, at 31 vertices.

I also attempted a sampling rather than exhaustive search: this throws away all but a tiny portion of the results each round in the hope of finding a route through by chance. Unsurprisingly, this has not yielded anything, although the vertex counts attained can be decent.

Finally, it’s natural to ask for the graph consisting of two non-neighbours and their respective neighbours. This sounds like a very minor tweak on what we’ve done here: we add vertex 15 a first non-neighbour of 0, then proceed to saturate it instead of vertex 1. But this too falls victim to acombinatorial explosion of possibilities – whilst it has not yet outright crashed, I expect days of cputime to complete it.

So, for now, I offer this up for others to consider. Perhaps these 11 graphs contain enough information for a mathematical argument rather than trying to push on computationally; or perhaps some of the code I’ve written will be helpful. But if not, it was enjoyable playing around with some ‘proper’ maths for a while, and to overcome the series of programming puzzles presented by each of the search, reduction and validity checking bottlenecks.