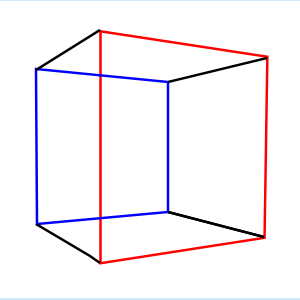 A cube in two-point perspective.

How can we represent a 3-dimensional object such a cube in only 2-dimensions, such as on a flat piece of paper? This is the problem of projection, and it inevitably introduces inaccuracies. Different choices of perspective will alter what features survive the projection process. For instance, a perfect cube has all faces square, with corner angles of 90 degrees, and opposite sides of each square are parallel. But in the two point perspective shown only the vertical lines remain parallel; the introduction of vanishing points has distorted the horizontal ones and thus the angles.

Instead of thinking of the cube as a solid object, we can describe it in terms of its vertices (the corners or points) and the edges that join them – that is, as a graph! But in the previous post we were interested in planar graphs, and in our 2-point perspective we have edges crossing. This might seem unavoidable – the `front’ blocking our view of the `back’ – but through a different choice of projection we can get a planar graph of the cube, or indeed any suitably well-behaved solid. This is the key to using graph theory to study those solids.

Instead of the two-point perspective, we can draw the cube using one-point perspective: our viewpoint is the centre of one of the faces, and corresponds to a single vanishing point. We still have all the vertical lines parallel, but now the top and bottom of the two faces algined with our view (the red and blue ones) remain parallel too. Whilst we have substantially distorted sizes now – in the perfect cube, the red and blue squares would be the same size – this perspective has given us a planar graph representation of the cube, known mathematically as its Schlegel diagram. 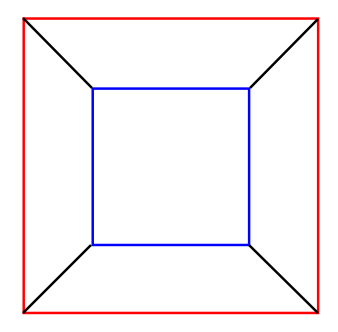 A cube in one-point perspective.

A polyhedron is a 3 dimensional solid made up of flat faces, joined along straight edges that meet at vertices (sharp corners): this terminology should already feel familiar from our discussion of planar graphs! And indeed there is a connection:

If a polyhedron is convex (its surface does not intersect itself, and straight lines joining any two points remain within its volume or on its surface) then its Schlegel diagram is a planar graph.

In Julia’s writeup, a special case of convex polyhedra, the regular or Platonic Solids, are mentioned- these have the additional restriction that every face is the same regular polygon (all angles and side lengths equal), and the same number of faces meet at each vertex. The cube is an example: each face is a regular 4-gon (a square!), and we have three squares meeting at every vertex (corner).

The claim is that there are exactly five (convex) examples of these, and we can use our results on planar graphs to prove this! By example, we know there are at least five:

So our task is to rule out the possibility of any others. To do this, we need a little more notation for graphs: we call the number of edges meeting at a vertex the degree of that vertex, d; we call the graph d-regular if every vertex has the same degree, d. By the `double counting’ argument mentioned in the previous post, if you add up the degrees of all the vertices then you’ll get twice the number of edges (since each edge contributes 1 to the degree count at each of its ends). So a d-regular graph with V vertices has dV/2 edges.

Now let’s imagine we have some Platonic solid; whatever it is, it is made out of faces with some fixed number k of sides, and there are F of them. There are also V vertices, and at each of these we have d edges (the sides of the polygons) meeting. We can then project to a planar graph G, the Schlegel diagram, which will also have F faces (of degree k), V vertices, and E edges (corresponding to the sides). The graph G will be d-regular because d edges met at each vertex of the solid, so we know that 2E=dV, or V=2E/d. Every face has degree k, and there are F of them, so the total sum of face degrees is kF; but we know from last time that this sum is also twice the number of edges (the handshaking lemma). So 2E=kF too, or F= 2E/k.

So there can only be 5 Platonic solids, and we were able to prove this without having to consider any geometric properties like angles or side lengths – just the `combinatorial’ information about how many faces, edges and vertices are involved and the way they connect, as captured by a graphical representation. So, let’s close this part by taking a look at their Schlegel diagrams. 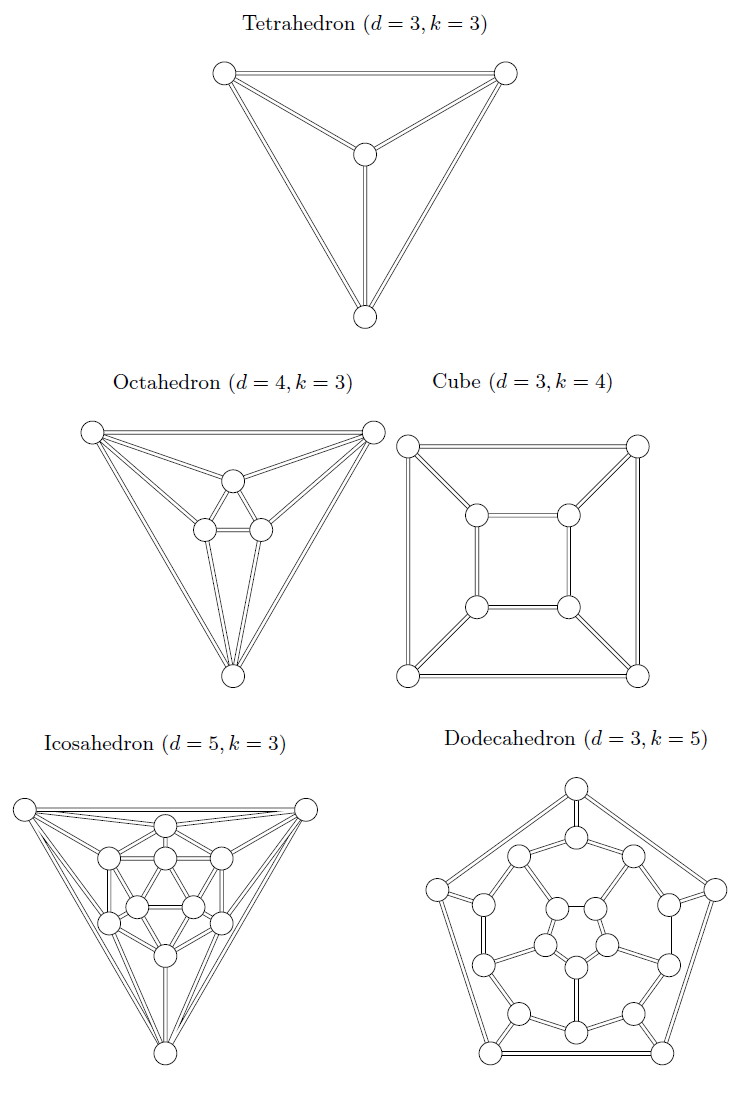