Earlier this month I attended the 2013 Joint Mathematics Meetings, trading freezing Britain for sunny San Diego! This was the 119th annual meeting of the American Mathematical Society, the 96th of the Mathematical Association of America, my third trip to the US for a JMM, and the first at which I’ve given a talk. There are also sessions organised by the Association of Women in Mathematics, the National Association of Mathematicians, the Association of Symbolic Logic, and the Society for Industrial and Applied Mathematics, and with over 6500 people in attendance, no shortage of topics to hear about! One of the things I love about these meetings is that in addition to the sessions that you’re involved in, you have an opportunity to attend events that catch your interest, but you couldn’t normally justify travelling to on their own. Two years ago, I gave a complete rundown of my schedule for my first JMM; this year I thought I’d pull out some highlights.

As a photographer I have a particular love of architectural subjects. But even without a camera in hand, I can spend many a happy hour wandering an unfamiliar city absorbing its particular style (conversely, few things will put me off a place faster than ugly buildings – 60’s brutalists, I’m looking at you!) However, I don’t generally know much about what I’m looking at! So I was pleased to find a trio of consecutive talks in the MAA Session on Mathematics and the Arts of an architectural bent. One of the speakers turned out to be the author of a book – Mathematical Excursions to the World’s Greatest Buildings – which I received for christmas and am very much looking forward to diving into; and another also presented a series of locations used an examples in a course on multicultural mathematics. Perhaps it’s time for me to revive my mathematical tourism efforts! Most intriguing, though, was Frode Rønning’s talk on the Dutch Benedictine monk Dom Hans van der Laan, who sought to find theoretical underpinnings to architecture. His study of the limits in our ability to perceive differences in proportion in the context of 3-dimensional space led him to the plastic number: the real solution to P+1=P3. Much has been made of the alleged aesthetic qualities of its more famous cousin, the golden ratio; that is a solution to &Phi+1=Φ2. Another characterisation of the golden ratio is that it satisfies Φ-1=1/Φ the plastic number is similar in that P-1=1/P4. A number is called morphic if there are positive integers m and n such that x+1 = xm and x-1=x-n; the golden ratio and plastic number are both morphic, and in fact, they are the only morphic numbers! But my own connection to this number is through Mahler measure; in my work, it has only been necessary to study non-reciprocal polynomials, because it is known that the Mahler measure of reciprocal polynomials is bounded below. What by? The plastic number! `Superfrabjous’, by George Hart – from the art exhibition at the 2013 JMM.

Continuing with the artistic theme, I as usual enjoyed the art exhbition (although I didn’t find the time to contribute a piece of my own). Sculptural work, such as shown to the left, always has immediate appeal for me, but there were some strong printed works this year too. Particularly striking were Daniel Gries’ Fractal Cylinder renders: there are lots more of these here, and the code to generate new examples is also available. As beautiful as they are on-screen, they’re even more impressive as a decently-sized and properly mounted print. I was also amazed to find that Charles Redmond’s Starry Pines was a purely generative work, using something called the Context Free Art language, which I’ll have to look into. Finally, I found myself repeatedly returning to Etienne Saint-Amant’s WABE: Broken Perspective.

I attended a couple of talks of a game-theoretic flavour in the AMS Special Session on Mathematics and Social Interactions. Angela Vierling-Classen examined the issue of gendered division of parenting, demonstrating models in which, even if both parents value equality of effort and it forms a valid Nash equilibrium, most starting states converge to equilibria with unequal assignments. Thus it’s not enough to want equality – you have to commit to it from day one! Her presentation also touched on some of the difficulties in publishing highly mathematical work in sociology journals. The other looked at ‘sacred values’, and how inviolable ties between players in adversarial evolutionary games could lead to new outcomes compared to models in which nothing is sacred. In particular, criminal gangs were able to persist in a game which otherwise tends to a crime-free utopia, as players may be compelled to act against self-interest in support of the gang, or alternatively may benefit from allegiance to such a group by way of protection from other criminals!

Loosely on the subject of sacred values, this session also hosted a talk that has surely the strangest abstract I’ve ever seen at a conference; tragically I couldn’t make it to the event, so feel I shouldn’t dismiss it outright as nonsense, but, well, take a look for yourself. Is anyone brave enough to buy the book? 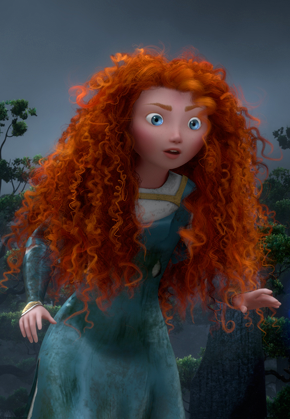 Tony DeRose discussed some of the challenges of animating Merida – or rather, her hair!

Instead, I opted for the MAA Invited Address, How mathematics has changed Hollywood by Tony DeRose from Pixar. Obviously this was a visual treat, with behind-the-scenes (as it were) footage from Monsters Inc, Finding Nemo and Brave. Originally, handling physical constraints like the effects of gravity or momentum, or preservation of volume, were simply down to the animators; trying to implement real physics into the rendering systems introduces all kinds of difficulties when reality clashes with artistic vision! This causes both entertaining mathematical out-takes, and the need for creative solutions. For instance, Merida’s hair – which Tony describes as practically a character in itself – could not be implemented as individual strands, or it would whip around impossibly violently. To get the right mix of softness under low acceleration, whilst holding shape under high acceleration, a system was devised where curls are loosely coupled to a stiff core. Whilst no-one has hair like this, it paradoxically looks more realistic! Similarly, the robot Wall-E performs manoeuvres that would tear apart a real machine of that size; and no human is built like Mr Incredible! For Pixar, then, realistic physics is just the beginning – not an end. More technical detail was given in the context of a problem known as surface subdivision: a seemingly simple process of splitting and averaging raises interesting questions about its behaviour in the limit, with limit curves ranging from smooth, differentiable shapes to nowhere-smooth fractals: which can nonetheless be easily animated! Impressively, Pixar have made all this work freely available as the open source library opensubdiv, and indeed have a research arm that produces academic publications and technical memos.

DeRose is also clearly passionate about enthusing young people about STEM topics, and spoke a bit about his involvement with Young Makers, which supports Maker Faire-style projects. There has been a long-running Art of Pixar travelling exhibition; plans are apparently well underway for a corresponding Science of Pixar in collaboration with the Museum of Science in Boston. I’ll be looking out for that.

The invited addresses were linked to extended sessions on the same theme, with additional speakers- for De Rose’s talk, this was the MAA Invited Paper Session on Mathematics, Computer Graphics, and Film Production. I only had time for one of the talks, Tim Chartier’s Animating Class with Computer Graphics. But if I ever find myself lecturing linear algebra, I’d be highly tempted to use some of his ideas on illustrating matrix operations through their effects on graphics. Working in Matlab, linear transitions between two source images can be used to create animated tricks like invisibility or teleportation. Splitting images into separate matrices for each colour channel then manipulating them can give Warholesque artworks, or apply effects akin to Instagram or Photobooth.

In fact, Chartier is a mine of ideas for making undergraduate education more engaging (a theme that is picked up in many other sessions), and gave an MAA invited address himself, Thinking Linearly about Data. This focused largely on the questions of ranking and clustering of data – but whereas such talks normally look at Google’s pagerank, or recommendation tasks like the Netflix prize, this talk was new territory for me, tackling sports rankings. I have to admit that I was held back slightly by my complete lack of insight into the worlds of basketball and american football, but for US students these are relatable topics, and the mathematics is rather more accessible. Indeed, one of the ranking systems for american football was devised by an undergraduate! Best of all, students can take what they’ve learnt, make their own tweaks, and apply it successfully to a real-world problem. March madness is a highly popular basketball tournament, and literally millions of predictions as to who will be eliminated when are made by ‘bracketologists’. Using graph theory and linear algebra, undergraduate mathematicians have managed to out-perform sports `experts’ and win bracketology contests. There’s a writeup (and video version) of a previous MAA talk by Chartier on all this

The linked session, Thinking Linearly about data was just one of many I attended that looked at social network analysis, big data, and often both: other sessions included the AMS-MAA-SIAM Special Session on Research in Mathematics by Undergraduates and Students in Post-Baccalaureate Programs, the MAA Invited Paper Session on Mathematics in Industry, and the MAA Session on Mathematics Experiences in Business, Industry and Government. This seems to be quite the hot topic at the moment, and it was great to hear from a range of practitioners from outside of academia, and to see that even undergraduates are making progress in this area. There were talks on data forensics by mobile phone providers trying to detect the new identity of former customers; more on sports analysis; the challenges of performing even simple tasks like triangle-counting for clustering when data sets are several terabytes in size; the perils of `weapons of math destruction’, whereby metrics are used inappropriately and detrimentally in contexts as diverse as credit scoring, teacher evaluation, and medical insurance; assessing the efficiency of transport networks; and using community detection for understanding the brain. All excellent food for thought!

Finally, the Joint Meetings provided a great opportunity to raise awareness of The Mathematics of Planet Earth 2013, a year-long program of both research and outreach on some of the most fundamental problems related to challenges facing the planet. Climate change will naturally play a big part in this, and we were treated to two talks by mathematicians working in an environment where those changes could be most dramatic: Antarctica. I have long had a fascination with the polar regions, jealously following blogs such as The Dry Valleys, or pricing up impossibly ambitious sightseeing trips to remote parts of Norway. Turns out, if I’d stuck to applied maths, I could have visited such places and done useful things, rather than just hope to be a tourist! Fortunately I was able to live vicariously through these excellent presentations. Emily Shuckburgh from the British Antarctic Survey, gave the AMS-MAA Invited Address Using mathematics to better understand the Earth’s climate; whilst the MAA-AMS-SIAM Gerald and Judith Porter Public Lecture was Mathematics and the melting polar ice caps.by Kenneth Golden. This last finished with a fantastic video that I was hoping to share here, but it seems we got a sneak preview as it isn’t available online yet. However, you can get some idea (with less shots of curious penguins) from this earlier footage:

There were many other talks, from a variety of sessions, that I attended: but since I claimed this would be a selection of highlights rather than a full log, and is weighing in at 2000 words, I think I’ll stop here!